Thank you for the constant support! I am working on a monitoring system. That contains a bunch of sensors connected to the Bolt via hardware interfacing(UART) as mentioned in the docs site. As per the guidelines given, I am able to complete the graph simulation in the bolt cloud for the sensors connected in the arduino analog pins as follows:
A0->ldr
A1->lm35
A3->wet sensor
The product configuration is done by selecting 6 UART pins.

But still, I planned to make a z-score analysis for the connected sensors in Arduino.
for this, I raised a query in the forum. (The link for the post)

So, As said by Mr @vinayak.joshi I had uploaded the code to the Arduino and does the necessary changes. But I am unable to simulate the graph after changing the code. I need them both to get worked simultaneously(i.e Z-score analysis as well as the graph simulation in bolt cloud) This is the current code i had uploaded in my UNO.(link)

This is the previous code used for generating the graph by sending this command.(boltiot.setCommandString(“RD\r”,getAnalogData);)which worked fine for graph [link] Refer 63&64 line in the code.

Even I tried to insert both the commands in them(i.e Pushdata and analog data like this=>link)but it doesn’t get worked.

So, Please help me to sort out this issue for my project completion, by saying how both the commands can be used together for the graph simulation as well as z-score analysis.@vinayak.joshi@shoeb.ahmed I hope my query will get resolved.Thank you for spending your time.

As per what I can understand, the modification you have made to the Arduino, ie setting the command string “RD\r” for the function getAnalogData should get your work done perfectly.

The only issue that I can think if is that your Bolt WiFi module may be running an old firmware.
Try upgrading your firmware to the latest using the steps given in the below link

We regularly provide updates to the firmware for pushing new features, adding security patches as well as bug fixes. It is recommended to stay up to date with the latest version of the firmware to let you make the most of our new features. There are...

Thanks for the response!

I had already updated my Bolt’s Firmware. 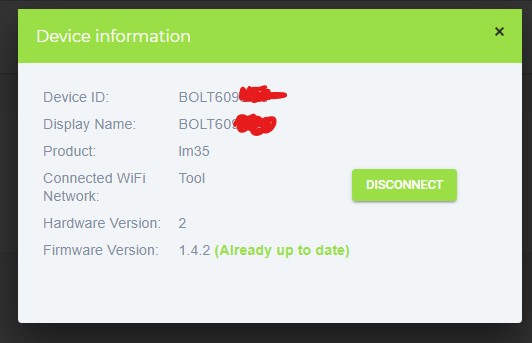 Is that command: boltiot.setCommandString(“RD\r”,getAnalogData); is enough for the both Graph simulation as well as Z-score analysis to run at the same time adjacently? here the Z-score analysis were done in the Ubuntu server and the Graph simulation was done in the Bolt Cloud adjacently. So, try to say the solution for the both things to get worked.