Not able to check connection on the app

Inspite of the blue light and green light being stable, the app shows no connectivity! 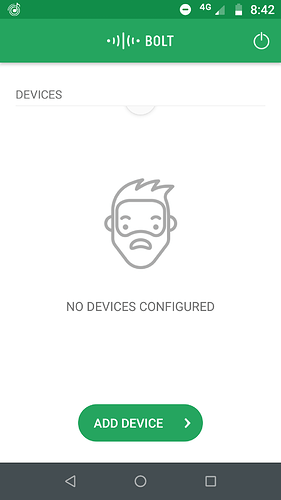 @devanshijhaveri2001 If the Blue and green light are on, then the Bolt will not be shown on the add device button since it is already setup.

@shoeb.ahmed but the main page shows “no devices configured”

I also faced the same problem…so I would suggest you to first switch off the WiFi to which the bolt got connected earlier (since you are saying both green and blue light were stable) . Then switch on the bolt again and you would see the blue light blinking slowly. Now open the bolt mobile app and click on add device.You would see your bolt option and click on that. After that switch on the WiFi again and connect the bolt to it.

@devanshijhaveri2001 Are you using the same email ID on the mobile app you have used to register the device?

i have done the same procedure as u said but after connecting to my wifi again it is requesting to switch off and on my wifi when i press allow it shows invalid user credentials, but the both the LED are on but my phone is connected to my WIFI.

You only need to connect your phone with bolt hotspot for the first time. Next time when you power on the bolt wifi module it will work on the password you have set when you setup the device. I would suggest you to try and add device again. If you face the same problem kindly attached the snapshot of the error

@shalinibhasker1999 As you have mentioned that both the LEDs are on, the app won’t be able to connect to the Bolt device as it is already setup.
In case if the Bolt needs to be setup again, the green LED on the Bolt will start blinking.

its done when you use another phone

The bolt device and your mobile should be connected to same wifi. i.e,mobile hospot from another phone or a wifi router

Hi, good that both of your blue and green light are working, it shows you are on the right path.But let me tell you a fact that the hotspot you are using to connect bolt module is not of 2.4Ghz.
Considering our mobile has a hotspot of 5 ghz, hence go to hotspot settings in your mobile.Select AP and in that select 2.4Hz frequency.And connect your bolt wifi module to this hotspot.Let me Know if it worked