Could someone explain this piece of code? 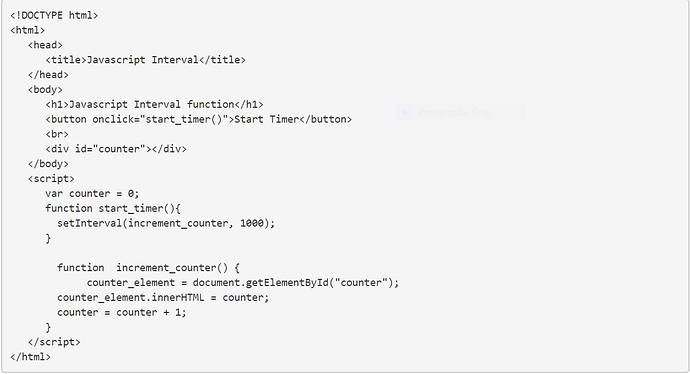 I assume you understand all html tags and only require explanation of the javascript code.

First, a variable called counter is defined and initialized to 0. This is will be responsible for the timer.

Next, a function start_timer() is defined. It uses the setInterval() function which is a predefined function in javascript used to execute a certain code again and again after a certain time interval. Here, in this case, the function increment_counter is being called, which is defined below, it at a regular interval of 1000ms or 1 second.

Further, the function increment_counter() is defined in which a variable counter_element is defined.

document.getElementById() is used to access the contents of a division or a paragraph in a html document identified by its id, which is “counter” in this case. “counter_element.innerHTML” is used to access that part of the HTML document and is being assigned to “counter” which has been initialized to 0 initially.
The next line is to increment the variable “counter”. So, every time the function increment_counter() is called, the value of counter will be incremented by 1 and hence be displayed on the webpage.

I hope this would help you understand the code.

I assume that you have some experience in web development, In this code we are trying to implement a counter which increments its value on certain interval.

Hope you understood, if you are having confusion in any part I have explained, just point it out!