Video of building your first webpage is not yet all opening?Could you please help me out by providing any link of that video 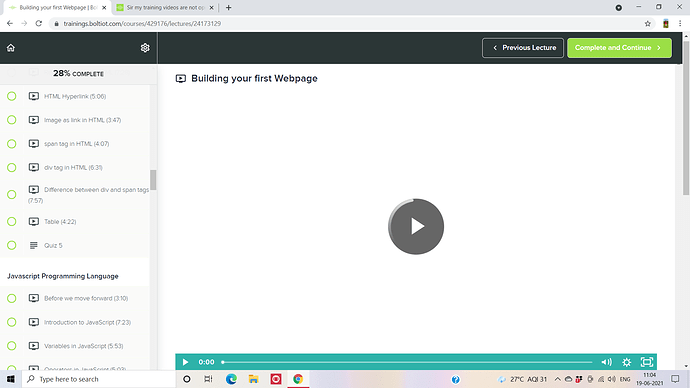 @rehanasadhikali786 there is no other way of accessing the videos other than the course’s dashboard.

Remove the cache and then logout from the portal. Then login again. You can also try another browser or device to view the contents. Use Microsoft edge or any other browser. Hope that will solve your problem

Are you using an updated version of chrome? Also, can you using a different network, few students using Airtel’s network were facing issue of video loading.

Hello, unfortunately there is no other way, the video is only available by signing in with your course activated account. To overcome this issue, try cleaning your cache of the browser or else try using a different browser while signing in with the same account.

I am facing almost the same issue. The video plays normally for a while and then stops playing at the 5:02 timestamp. It keeps buffering after that. On trying to skip ahead to a later timestamp, the video goes to the very beginning. I cleared the cache and also tried from different browsers (Chrome and Edge) and different networks. But nothing seems to be working. It’s always the same time when the video stops playing. The other videos seem to be playing fine. It seems the issue is only with this particular video. I also tried on my smartphone.

EDIT: I managed to solve this issue by skipping ahead in the video.

When I had tried it earlier, I had skipped ahead after reaching timestamp 5:02. But that didn’t work.

This time I directly skipped to 5:04 before ever reaching 5:02. So it started playing from there. It’s just the 1 or 2 seconds near 5:02 which had the problem apparently.

1 Like
Unable to open a video
BUILDING YOUR FIRST WEBPAGE under the HTML video in the bolt iot training is not being played even after trying it different times
Video paused for a particular video
The video of building your first webpage is stopping at 5:02 time
Building your first Webpage
2004816 July 3, 2021, 3:26am #6

Hi
I am facing the same problem .
This time I directly skipped to 5:04 before ever reaching 5:02 but the video is buffering from start of the video. Any one can help to overcome this problem . I am stock due to this one video clip .

Hello. I guess this is a glitch in the page. Even I faced the same problem.[ Then I found the same video uploaded by Bolt on youtube. I have attached the link for the video. Happy learning.
[Building your first webpage] (https://youtu.be/zdw4HV40Pfc)