How does MQTT protocol work? What is overhead data? What overhead data does mqtt protocol transmits to cloud? What does bandwidth and processing capability has to do with this requirement.
Can anyone explain in detail.

It stands for Message Queuing Telemetry Transport.It is lightweight messaging protocol.It has low power usage, minimized data packets and ease of implementation make the protocol ideal of the “machine-to-machine” or “Internet of Things”. 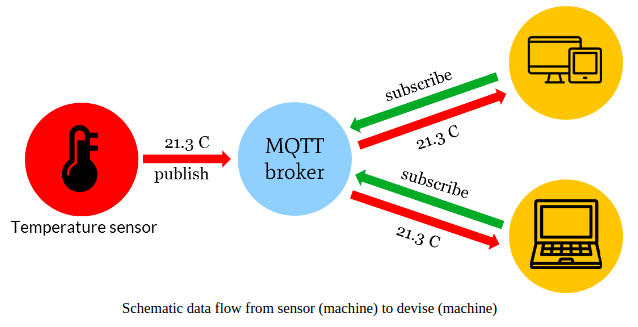 Hi could you also explain what is overhead data ?

For a programmer overhead refers to those system resources which are consumed by your code when it’s running on a giving platform on a given set of input data. Usually the term is used in the context of comparing different implementations or possible implementations,the extra bits added to actual message data(payload) to recognize the sequence of parts of message.
for eg. It’s like when you need to go somewhere, you might need a car. But, it would be a lot of overhead to get a car to drive down the street, so you might want to walk. However, the overhead would be worth it if you were going across the country

Thanks for the above information.
Could you also answer this
What overhead data does mqtt protocol transmits to cloud? What does bandwidth and processing capability has to do with this requirement.

First let me tell you what does protocol clearly mean. “PROTOCOL” is a digital language through which we communicate with others on the internet. Usage of internet is not possible without protocol.Generally message travels from sender to receiver via a medium or path using a protocol. There are many types of protocols such as HTTP,DNS,FTP…etc and MQTT is one of these.For communication purposes we require a certain bandwidth to send the information or data and it plays a very important role in communications so that is why we have to send the msg signal using less bandwidth this is an important point in communications.Overhead is the data that has to be sent along with the information or msg signal as header.The information will be wrapped in a network protocol with overhead to be sent through routers to reach the correct destnation.As it is already mentioned MQTT stands for message queuing telemetry transport.Its small size, low power usage, minimized data packets and ease of implementation make the protocol ideal of the “machine-to-machine” or “Internet of Things” world.coming to your last question in data trasnmission and telecommunication, overhead bits are nondata bits necessary for transmission. Such bits are not considered as part of good output. May be the overhead data that the mqtt protocol transmitts to cloud is also some nondata bits.

Thanks for the detailed information