Bolt WiFi Module is offline though connected to the internet

My Bolt WiFi Module is malfunctioning.
Blue LED is slowly blinking and green led is off.
It shows that it is connected to home wifi network but it still shows Offline.
I started my project 1 connections mostly with a wrong resistor,before that everything was stable(Blue LED and green led were stable.)
Is my Bolt WiFi Module damaged. If yes where and how can i reorder it
It also says update available but offline 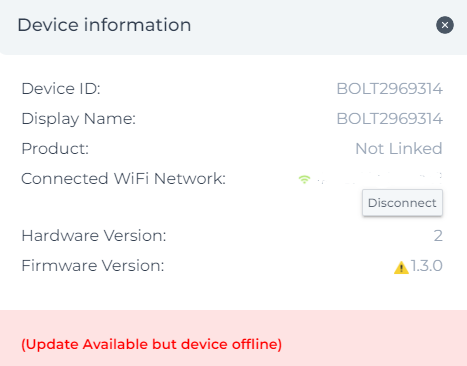 The green light being off indicates that it is not receiving internet signal from your wifi network. This might happen even if the module is connected to wifi (although a slowly blinking blue light means it’s still emitting its own hotspot signals)

Hello , @ronit.sphs @eeshaan009
With BOLT WI-FI module kit the instruction Manuel is given in which the indicators are mentioned.
If your WIFI module is showing green light it means it is connected to the home Wi-Fi network but if it isn’t receiving the internet it means you need to check the connectivity of your WI-FI network ,
you need to disconnect and restart the whole process to set up your Wi-Fi module on your mobile phone.
Steps : Text tutorial: Setup and build first project
also the indicators : https://docs.boltiot.com/docs/bolt-wifi-module

I too had this problem in the beginning. I couldn’t work on the projects for over a week. Later, I tried connecting both my mobile and bolt module to a wifi network which had low bandwidth (2.4GHz) instead of 5GHz.

Hello , @soujanya6620
Hope your issue has been resolved ,
If there are still problems existing , do contact us.
Thanks for being patient,