Difference between a nodemcu and bolt iot module

@diyasmadhu49
While both the NodeMCU and the Bolt WiFi module use the same type of esp8266 WiFi modules, there are some major differences.
What makes the Bolt different from the NodeMCU is that it comes with a pre-loaded firmware, which allows you to configure it to do different things, like connect to a specific WiFi, or measure the value on the analog pin, or toggle a GPIO pin etc.
This coupled with the Bolt Cloud, gives you an IoT system which is quickly programmable.
There have been instances where developers had to spend a whole month to be able to control an LED connected to the NodeMCU via the internet, but that time drops down to less than an hour for the Bolt.

Starting with the hardware,

And yes: arduino can be used along with bolt.
And yess: bolt can connect to other cloud servers. Even telegram also. You’ll get to know all these when you go ahead with the course.

I hope this answered your question.

@diyasmadhu49
Sure i can help you out with it.
You can control the relay using your bold cloud account itself via a html program.
I can brief more about it if you can specify more on what you want to do with it.

i know can control the relay just by using the wifi module but i want to connect the relay to an arduino and control it remotely with help of bolt
the documentation section gave me an idea how to obtain information from a specific pin. but how do i control something like a relay or to output somethng

@diyasmadhu49
I recently came across a similar kind of project you are wanting to do(bolt+arduino+relay).
Like specified in this project arduino can be used to supply activation power. You can improvise more on this project.
Contact me if you have any doubts regarding this.
All the best!! 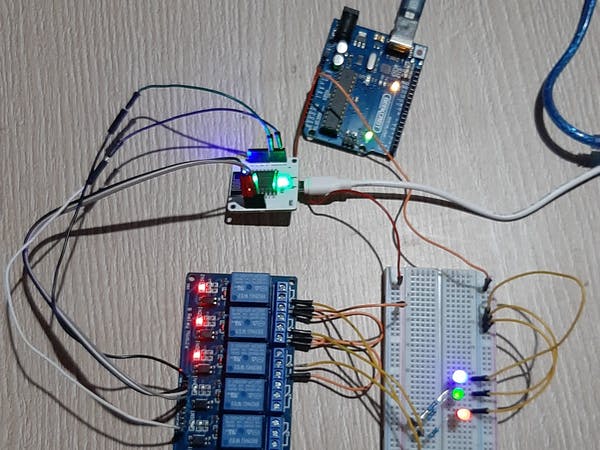 To control 3 LEDs connected to 8-channel relay using Bolt device and Bolt app (Arduino is used to power up the LEDs). By ROHAN.

thanks that was very helpfull

NodeMCU is based on the Esperessif ESP8266-12E WiFi System-On-Chip, loaded with an open-source, Lua-based firmware. it’s perfect for IoT applications, and other situations where wireless connectivity is required. This chip has a great deal in common with the Arduino – they’re both microcontroller-equipped prototyping boards which can be programmed using the Arduino IDE. If you’re familiar with Arduino, using NodeMCU is a logical next step if you’re looking for a more compact, WiFi-equipped alternative.