Reading of the LDR in LDR light monitoring system?

The maximum value that the LDR sensor can detect is 1.02 thousand so,don’t worry since you got the right value and keep going with the modules or try the sensor in darker places

Can you please tell how does this value comes?

That 1.02 thousand is the value of intensity of the light. The LDR is a sensor in which the resistance is inversely proportional to the light falling upon it. More the light falling upon it at that instance lower the resistance of the LDR. Now what happens the resistance tells us the voltage due to it using the formula Voltage = Current multiplied by resistance, V= I x R. I’m assuming that the intensity of light in this scenario is called Lux and it has a specific equation for using voltage. Also the maximum unit of intensity of light it can provide is near to 1000 so 1000 is the highest in my opinion.
Hope this helps.

is the highest value of ldr is 1.02 thousand is fixed, can we increase the maximum threshold for that, as i putting little bit light through the ldr it shows the value 1.02 thousand. so it get very confusing in making different count of intensity

A light dependent resistor(LDR) measures the intensity of light which is denoted by Lux. So in your case the reading of the LDR is 1.02 thousands Lux.
Lux is inversely proportional to the resistance of the LDR.

Hi, I tried in room light, with my mobile torch on LDR. In both case it is 1.02lux. Then I covered the module and got 490 Lux. So it is working. May be you should keep the module for 14 hours in the same place so that you can see the change in values. It may not be possible to different light conditions manually and see visible change in values.

The unit used for reading the LDR is Lux. So getting 1.02 Lux says that the room is bright

when u connect the LDR and 10K resistor to the bolt wifi module in the respective pins and set up wifi connection via bolt app and then link the product to cloud and then create a code for your product .then click the Deploy configuration 10 sec once and then click view option . you will receive a data as shown below 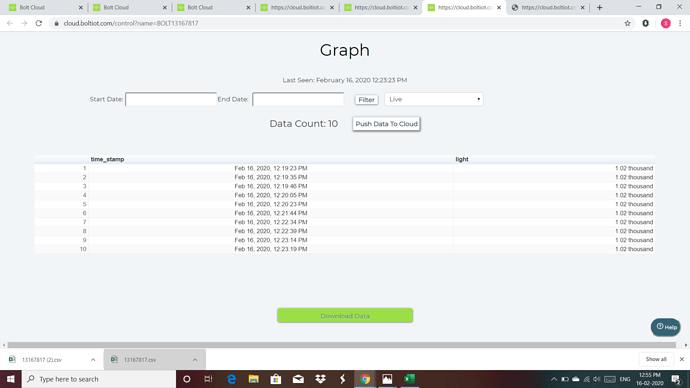 The LDR gives out an analog voltage when connected to 3.3V, which varies in magnitude in proportion to the input light intensity on it.Basically, here the variation in light intensity is read as change in the voltage. That is, the greater the intensity of light,lesser is the resistance and hence the corresponding voltage drop across the LDR will be lower too( because V=I*R, hence change in resistance is reflected as change in voltage). Since the LDR gives out an analog voltage, it is connected to the analog input pin on the Bolt module which has a built-in ADC (analog-to-digital converter), that converts the analog voltage (from 0-3.3V) into a digital value in the range of (0-1023). When there is sufficient light in its environment or on its surface, the converted digital values read from the LDR through the Bolt module will be in the range of 800-1023. So the value 1.02 thousand(1023) which you obtained does not have any unit but is a mere mapping of the analog voltage to the integer value in the range of 0-1023 by the inbuilt ADC(Analog to digital converter) and the corresponding value is displayed on the screen.

Yes, the highest value that is obtained from the LDR can be 1.02 thousand only. This is because the built in ADC in the bolt module maps the analog input voltage which is in the range of 0-3.3V to the integer value of range 0-1023. So, the maximum analog input voltage by the LDR can be 3.3V when there is maximum brightness. Hence it can be mapped to 1023 or 1.02 thousand which is the maximum value that can be displayed on the screen.Maybe try changing the place to reflect the change in the output values or just cover the sensor with your hand to reduce the intensity.

hii @panati.tejaswini i have done this test at night in my room at 8 Pm and my voltage result came 46
but when i switch off my lights and tried again it reduces to 2 why ?
It should increase as per theory because by switching off room lights there is whole darkness in my room and theory says if there is more darkness resistance increase so does voltage will increase right ?

But in my case it decreases why let me know

hey! @adidhand19 according to my knowledge, the relation amongst Voltage Output(Vout), Voltage Input(Vin), Resistance of circuit® and Resistance of LDR(Rldr) is given by the following equation:
https://www.electronics-tutorials.ws/wp-content/uploads/2018/05/io-io19a.gif
Hence, when resistance of LDR increases(in dark), Vout or Voltage output decreases.
Hope this helps! Correct me if I am wrong anywhere.